You are here : Home News Survey: the biggest challenge faced by programmatic going into 2017

Survey: the biggest challenge faced by programmatic going into 2017

As the curtain begins to fall on 2016, it’s plain to see that for another year, adoption of programmatic advertising is showing very little sign of levelling off.

On the contrary, a study by Zenith heralded spend to rise 31% next year, outstripping all other channels in the growth stakes, while playing an even bigger role in the buying process of these other methods of advertising. In fact, you’d be hard-pressed to find statistical evidence not backing a tidal shift towards automated display ad buying, and this in itself is enough to say it’s working.

Despite this, the programmatic buying industry still carries a brace of challenges as it enters the new year, manifested in concerns regarding transparency, brand safety, bot fraud, data use and viewability.

Most recently, however, concerns over automated buying’s aptitude at judging the quality of websites it works with have been conflagrated by the extensive media coverage of ‘fake news’ sites, following their supposed role in influencing the US election results.

Sensing it was time to run a redux to a poll we ran earlier in the year, PerformanceIN asked 100 of our audience of performance marketers what they consider to be the key challenges faced by programmatic as it rolls into 2017. The findings can be found below. 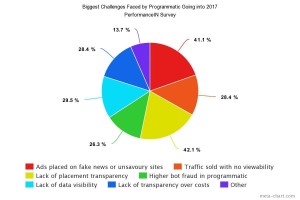 While not quite topping that of general ad placement transparency, concerns over fake news sites did indeed rank as a key point for improvement among a large portion of those surveyed (41.1%), providing comment for MainAd’s head of sales, Matt Keating.

“Brand safety is not a new concern, but political events in 2016 have certainly thrust the term ‘fake news’ into the spotlight, and we need to apply greater scrutiny to our traffic sources in order to counter it.”