You are here : Home News How ecommerce adapts to the festive period of Diwali

How ecommerce adapts to the festive period of Diwali

How does India deal with modern day consumerism during this occasion?

The Diwali festival, falling on 19th Oct this year, is the biggest shopping season for Indian households, as they prepare to spend hefty on festival ornaments, lights and most of all, presents. In modern day consumerism, such cultural traditions have influenced the way in which ecommerce giants operate and sell. Many online retailers adapt their offerings and battle out lengthy sale periods to get ahead of their rivals. This is evident from the rapid hike in consumer spending, during the run up to the celebration, for electronics, clothing, and jewellery, to name a few. Most consumer durables firms are expected to achieve a 10-40% increase in sales from the previous year, during the festive month (Livemint, 2017).

What is Diwali, why is it celebrated and by who?

One of the most significant festivals in India, Diwali represents the festival of light, good over evil, light over darkness, and is an auspicious celebration for Hindus and Sikhs in many countries across the world. It is celebrated on ‘Karthik Amawasya’, the new moon date, usually in October/November, from the Hindu lunar calendar.

It is believed Diwali celebrates the return of Lord Rama to ‘Ayodhya’ (his Kingdom), after he saved his wife Sita from the demon Ravana. His return with Sita, after 14 years in exile, was a much-rejoiced occasion. The entire city was lit with ‘diyas’ (oil lamps) during his return, symbolising life and hope for all.

People now adorn their homes with diyas, spark fireworks and draw beautiful ‘Rangoli’ patterns on the floor. It’s a welcoming traditional ritual where people buy new clothes and jewellery, and share sweets and offerings with relatives, friends and neighbours.

How ecommerce giants are taking advantage and taking over

The festive season is one of the biggest drivers of online purchases, which are increasing in scale, variety and promotions. The period leads to abrupt surges in spending, creating an uplift in the ecommerce market. “Gross e-commerce sales are likely to touch Rs 9,000 crore, a 40% jump over last year”, according to Times of India. It’s no surprise then, that ecommerce giants have deployed various strategies to maximise sales with major retailers adjusting their strategies according to consumer demand.

Amazon, much like other online marketplace sellers, starts preparation for the festive season months ahead of time. Just as they do with their ‘Great Indian Festival Sale’ – the first phase of which was initiated on 21st until 24th Sept 2017, second phase on 4th Oct until 8th Oct 2017, and the third leg is currently in progress, until 17th Oct. The sale offers massive discounts of up to 60% on electronics, home appliances and more.

According to Amit Agarwal, Amazon’s India Head (Economic Times, 2017), “Two Amazons will cater to customers this festive season compared to last year”. The global ecommerce giant saw a surge in sales in the run up to the festive season in 2016, therefore they are doubling their efforts this year.

Wallet payments are rising in popularity, such as Amazon’s ‘Pay Balance’ feature, which enables customers to make instant purchases using their pre-loaded payment accounts. A plunge in consumer spending, due to last November’s demonetisation resulting in a cashless economy, has led to retailers modifying their payment systems; to promote the ease of online shopping. Cashbacks of up to 15% are also offered to those who make in-app purchases on Amazon Pay.

Similar to Amazon India, online shopping giant Flipkart organises multi-day sales, such as the their first sale period – ‘Big Billion Days Sale’ – from 20th-25th Sept; and the second leg ‘Big Diwali Sale’ on 14th-17th Oct, with huge promotional deals (Business Standard, 2017). Last year, Flipkart generated twice as many sales from 2015 and claimed to have “accounted for at least 70% of total e-commerce sales in India” during its sale (Livemint, 2017). For that reason, and because Flipkart recently turned 10 years, this year’s sales are said to be bigger than ever.

After back-to-back sale dates from both online retailers, Flipkart’s sales volume seems to be in the lead with the help of its smartphone sales, overshadowing those of Amazon India. Both retailers have heavily discounted new smartphones such as the iPhone 8, Samsung Galaxy Note 8, HTC U11 etc. (The Indian Express, 2017) on their sites, encouraging online spending.

What to expect next 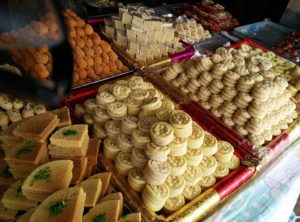 The coming few days are bringing another leg of deals and offers for the Indian consumers, who don’t yet seem to be exhausted with the myriad of products to buy. The digital marketing industry is booming and has already achieved a growth rate of 30% last year, and estimated growth for year 2017 is 40%. With both ecommerce giants having made a combined sales amount of $450m in just the second leg of sales window (Economic Times, 2017), sellers are being asked to stock up on inventory to meet the demands of buyers.

Contrastingly, smaller retailers like Snapdeal have taken a step back during the sales period this year, and organised early, smaller-in-scale sales to avoid clashes with the big players. Similarly, Shopclues ran its Diwali sale from 21st-28th Sept, with lower annual marketing budgets. They prefer to not partake in the back-to-back sale periods, as they acknowledge the power and superiority of the giants.

Overall, the growth rate is not going to be stagnant in the coming years. Companies are shifting their advertising budget from traditional marketing to digital marketing strategies. According to Forbes India, “If smartphone and internet usage statistics are to be believed, India is quickly becoming a digital-first nation where the adoption levels towards new trends are much higher”.

Companies are making it ever so easy to buy goods. Strategies change to facilitate the season by doubling resources and efforts. Fore planning by adjusting the ‘sale period’, and increasing the window of time for consumers to spend their money; therefore, maximising sales and profit. Promotions make spending seem less spurge, more essential to enjoy a good celebration. Consumers prepare themselves for the Diwali season every year, urging retailers to stockpile in the countdown to the occasion.

So, let the battle resume…

Having had long term ties to the Indian market, MainAd’s tech and R&D team is based in the state of Kerala. Being present at the start of India’s digital marketing industry boom, has meant we’ve grown along with the market; working with almost all top affiliate networks and direct brands. Clients such as Pepperfry, HomeTown, Firstcry.com, GemPundit, and Clovia benefit from our expert teams who drive optimum results. Our latest venture ProfiliAd, an affiliate network, is an example of how we are actively and purposely keeping an eye on the growth of ad tech in the region.

Find out how we can help maximise your campaign performance in India, contact: [email protected]